Of Bandits And Bidding

Real-time bidding(RTB) refers to the buying and selling of online ad impressions through real-time auctions that occur in the time it takes a webpage to load. Those auctions are often facilitated by ad exchanges or supply side platforms(SSPs).  A RTB agent has a set of active ad campaigns each with its own targeting criteria. So when an ad request is broadcasted by an ad ex or SSP, each RTB agent has to take two important decisions, first is given the segment (a segment is just the unique set of features of the incoming request e.g. geo location, content category, ad slot size, ad slot position etc) which campaign to serve from list of active campaigns and the second one is, how much to bid at.

The first problem is dealt by smooth pacing algorithms. They involve allocating/spreading out the daily budget of a campaign throughout (if possible uniformly) the 24 hours time line. The main aim of pacing algorithm is to allocate the budget of a campaign  to different time periods in such a way that the campaign is able to exhaust the daily budget as well as impressions delivery is not skewed or biased. In this article I will not be discussing the details of pacing algorithm, rather I will dig into the intricacies of bidding algorithm, in particular how Bayesian Bandits can be used to determine optimal bidding price in real time.

Under The Analytical Hood

We are starting with the assumption that given a segment S (impression request), N RTBs are actively bidding on it. We are unaware of the number N and this number is a dynamic parameter. It may happen that the campaign running on one of the competitor RTB targeting the concerned segment ends, and we are left with N-1 bidder, on the other hand new bidders can join the bidding process thereby increasing the number of active bidders.

Another interesting aspect that makes this problem more challenging is that if an RTB lost the bid, it will never get to know the auction winning price.

We are further making an assumption that given an impression request a Pacing Algorithm has already selected a campaign and the win rate to achieve. There will be a specific win rate associated for each campaign and segment pair. Since each segment has different available inventory we can distribute our budget accordingly. So even though in next thirty minutes we are expected to receive 10000 impressions belonging to a particular customer segment we needn’t win them all. Based on all active campaigns targeting them, their respective budgets and availability of all other segments that can be targeted too our pacing algorithm outputs a win rate value. Now we will try to analytically formulate a model for the bid price prediction problem. I will try to be as much comprehensive as possible for the benefit of the uninitiated reader

Symbols used and assumptions made :

here n refers to total number of bidder and x is the bid price.The above distribution will give us the probability density of the bid price.

So given a bid price x the above pdf will give us probability density of winning the bid. 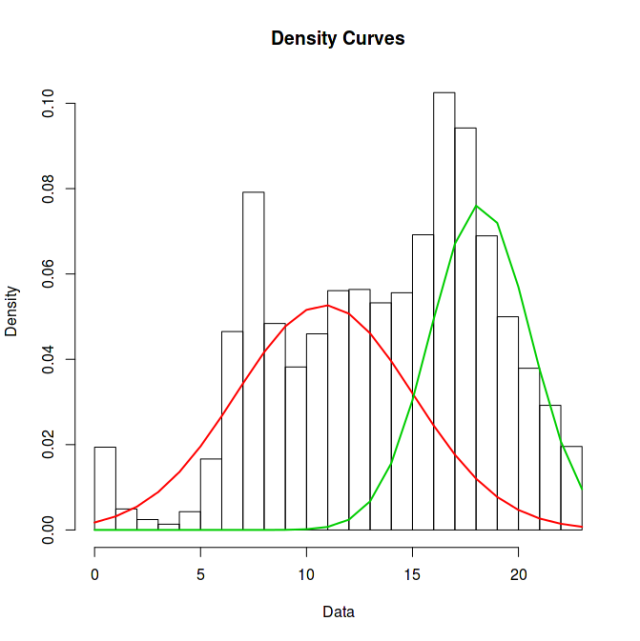 *So sometimes RTB2  wins since it bids more than RTB1 while other times it wins because RTB1 didn’t bid on those requests.

Now to calculate all the known parameters and draw this distribution we will need to get a sample of data points from this distribution, in our case these are the winning bid price over a significant interval of time.

To solve the above defined mixture model we will be using a variant of a technique known as reinforcement learning that works via allocating some fixed amount of resources to exploration of the optimal solution and spends the rest of the resources on the best option. After spending due time on various explore and exploit techniques like Multi Arm Bandit, Bayesian Bandits  etc I settled on using Boltzmann Exploration / Simulated Annealing technique.

We will be using Bayesian Bandit based approach  using Thompson sampling for selecting optimal bandit [5]. Though bayesian bandits are mostly used in A/B testing and ad selection based on CTR, according to our research their usage suits the requirements and dynamics of RTB environment. In [6] the authors compares the performance of Bayesian Bandit techniques with other bandit algorithms like UCB, epsilon greedy etc with the aim of selecting best ad to deliver to maximize CTR. All the referred researches show that Bayesian Bandit based method outperforms other bandit techniques w.r.t. total regret, proportion of best armed played, and convergence time and readily converges to best choice/action in the explore-exploit dilemma.

Please go through the references 3, 5 and 6 for getting comprehensive look into bandit based techniques. Henceforth I will be explaining the application of Bayesian Bandit method to RTB bidding skipping the underlining theoretical details.

As described in earlier section (titled win price distribution) that the distribution of win rate and bidding price can be a mixture distribution with latent parameters. Since we will never know the winning price of a lost bid we can’t solve this optimization problem in more of an closed form analytical way. Therefore we will try to discover the optimal bid price to get the desired win rate by exploring the bid price space.

RTBS: We have 3 hypothetical RTBS bidding on a particular segment, each generating bid price via a Normal Distribution with the following bid parameters

Since the required win rate is 40% and bid price of $3.5 is giving us the win rate closest to the target win rate the algorithm should win most of the bids at $3.5 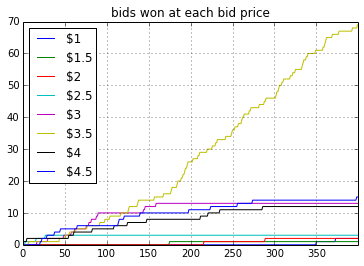 Figure 1.1 shows that for some initial runs (around 100 bids) the algorithm had enough information to make intelligent guesses about winning rate of each bid price. Once the exploration phase is over the algorithm was selecting $3.5 cpm as the bid price over and over. Figure 1.3 depicts that out of 400 bids around 225 bids were made at $3.5. The interesting aspect of the Bayesian bandit is that once the algorithm has enough confidence about the estimates of winning probability for each bid price, it was selecting $3.5 over and over (after bid #150, bid $3.5 was selected almost every time).

Issues with the Algorithm:

At each bid the algorithms updates the Posterior Distribution of the win probability of the corresponding bid price. As more and more bids take place and the algorithm’s Beta Posterior estimates converges, the variance of the posterior will be low and accurate predictions of the win rate will be made. Since the bidding environment is dynamic i.e. a new rtb can enter or an old rtb can leave the bidding process thereby changing the winning probability at some particular bid price, our algorithm will not be able to adopt to this change. The reason being that our posterior variance is too low and we have grown pretty much confident in our estimates.

Scenario 2: A new RTB enters the bidding process after 300 trials. By this time our algorithm had drawn win estimate for each bid price and has grown pretty confident about them but this new RTB will change the real win rate at $3.5 cpm bid. Now this bid will not be optimal choice for us. 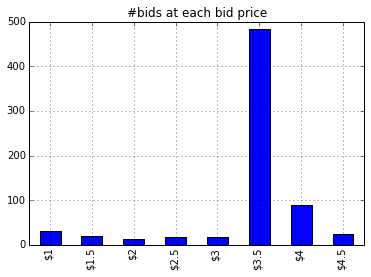 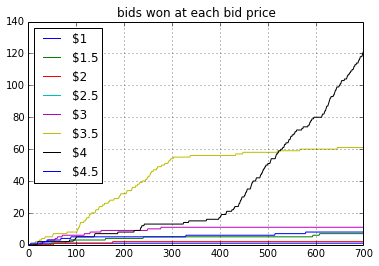 Figure 2.3 shows that as soon as RTB 4 enters the bidding process we stopped winning at $3.5 price. But since the algorithm will try to keep on believing that win rate is optimal for this bid price (think of it in terms of inertia or momentum) it will keep on bidding at $3.5. But with time it will lose the inertia and started selecting $4 cpm (after iteration 400). But overall this algorithm takes too much time to adapt to the new scenario.

To tackle the issue of dynamic environment described in the last section, I experimented with a technique called variance inflation. As we saw in last experiment that the Bayesian Bandit technique was able to continuously pick the best bid price for an ad request just after around 100 overall bids. As we select the optimal bid price more often the variance of posterior beta will decrease. This means that our algorithm is learning continuously and becoming more and more confident about its choice. But as soon as the environment changed e.g. a new RTB bidding more than our optimal bidding price entered the bidding environment we will start losing all the bids. But it took us around 200 lost bids to learn that the current bid price is stale and that we should select some other bid price. In a way after losing hundreds of bid our algorithm lost confidence (the distribution changed) in the bid price it thought was optimal.

To tackle  this problem I started increasing the variance of win rate distribution associated with each bid price by 10% as soon as we have made 50 bids on that price. This means that as soon as our algorithm starts selecting one particular bid price more often for an segment we will decrease its confidence by 10 % and ask it to explore other bid price. If the environment doesn’t change then the exploration will result in wastage of resources since we will bid either higher price or lower price then the optimal price, but if the environment changes i.e. lets say some new rtb enters or leave the bidding environment or some existing rtb starts bidding higher or lower, our algorithm will grasp this change.

I made the appropriate implementation changes and created similar scenario as defined in last section. We have 3 RTBs bidding for a segment  with following configuration

Objective :  The bidding algorithm will find the optimal bid price i.e. $3.5 after some trials. From this point onwards our algorithm will bid on most of the requests at $3.5. But after 300 bids a new RTB, RTB 4 will enter the bidding domain. It will start bidding little more i.e. $3.6 than us. Now we will see compared to results posted in last section how fast will our new algorithm will adapt to this change and relearn the optimal bidding price. 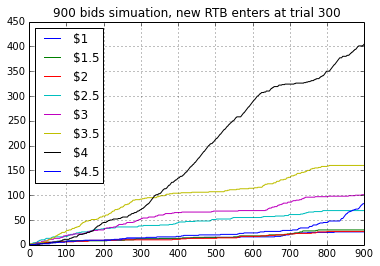 Figure 3.3 shows that the win rate for bid price $3.5 becomes nearly zero after trial #300 since RTB 4 was bidding at a higher price.

4 Responses to Of Bandits And Bidding